The Hidden Blade is the first book in the Sangwheel Chronicles series written by Marie M. Mullany. 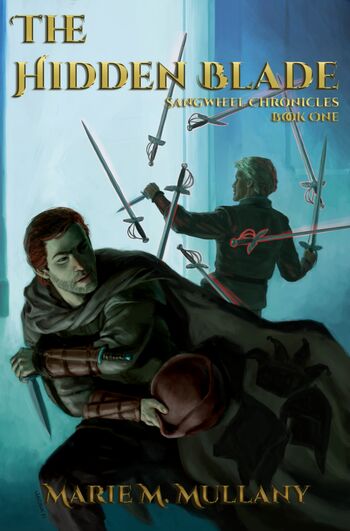 The bluron’s wings delivers a stark command of death as the Empire teeters on the edge of a most uncivil war. For the first time in Her long history, a ducal line has failed. The last duke of Etendulat is dead and none of his heirs have undertaken the Trials of Dusang. The wealth of farmlands that lies at the heart of the Blutben penninsula lack a ruler and greedy men circle the bountiful plains.

Into this high stakes game, Louis is sent to end the ambitions of Tybalt du Mamel, Baron of Somfaux, who would reach for the Etendulat Sash. With every step, he uncovers more of a treacherous plot that is poised to strike at the heart of the Empire. Forbidden magic shadows him and ultimately he must make a dire decision : Can he take the life of an innocent for the greater good?

Been a while since I read a high fantasy book that leans towards grimdark. I prefer light hearted books these days. Based on the fantastic reviews this book has received so far, I felt like giving it a shot.

The best thing I liked about this book was the worldbuilding — mannerisms, terms, cultures, creatures, magic, lore, etc. Epigraphs were used to good effect and there's a glossary at the end of the book as well.

Characters were well written too. Louis, the sole POV character, dons various roles (assassin, merchant, mercenary, bard, etc) to good effect. There was some sort of fate at play, bringing people together across different lifetimes. That led to Louis working together with Falk and it was good to see their friendship bloom. I hope Falk gets POV chapters in the sequels.

There were plenty of dark moments, which were to be expected given assassin main character and forbidden magic being the heart of conflict. Worldbuilding, Louis going about his tasks by choosing and playing different roles and some slice-of-life scenes (especially those at the end) kept me reading (as opposed to giving up due to the dark moments).

Pacing was good for the most part, except a few middle chapters that dragged a bit. Overall, I'd recommend this book for those who enjoy good worldbuilding and prefer dark fantasy.

What others are saying

The action scenes in the story are great. From battling strange creatures to a knight’s tournament on raised platforms, a sort of parkour with swords, to a one-man assault on a noble’s castle, the battles are tense and surprising; this is where the author’s command of realistic detail, not just sensory description but also of why things work as they do and how things depend on and interact with each other, adds great realism to very unusual challenges. The world has a complex magic system, or really a group of very different magical traditions, which are critical to the resolution of the combats and crises that occur.

From Ivan Duch's review on goodreads:

I'm an old-time fantasy reader and I must say there are many elements of Marie Mullany's first novel that feel both striking and fresh. The world is very interesting and portrays complex politics, interesting magic, and real-world characters who are very far from the characteristic good and evil portrayals from the genre.

📰 Use this link for the RSS feed.
✅ Follow me on Twitter, GitHub and Youtube for interesting tech nuggets.
📧 Subscribe to learnbyexample weekly for programming resources, tips, tools, free ebooks and more (free newsletter, delivered every Friday).